Feeling OK, although getting more fatigue and some slight nausea tonight.  Mostly getting a tad stir crazy, missing my daughter more every hour.  Struggling with what I’m doing here, what’s happening to me, the looks of sadness and incredulity I seem to get from everyone for a variety of reasons.

Family has started coming into town to visit, which is of course appreciated.  I think they expect me to look more like something out of Schindler’s List than I am, though.  Hair’s still connected and they have me on so many drugs that make you retain water I feel like the Titanic.  People don’t know what to say, and I get that.  Been dealing with that reaction since this all began.

Trying to keep my spirits up — the first few days it wasn’t too bad but there’s just no way to sit here, day after day, hour after hour, through the tests and rounds and being woken up and the drugs and the IV and not start really figuring out where you are in life.  And where I’m at tonight is not home with my wife, and trying desperately to remember what it’s like to feel my daughter’s breath on my neck when she gives me a hug.

I want to go home.  I don’t want to have cancer anymore.

Not going to write too much tonight — tired and it’s been a long, but relatively pleasant, day.  The transplant went fine.  Had a bunch of fatigue afterwards most likely brought on by the cocktail of drugs they were giving me while doing the transplant (benadryl, etc.) but had a nice dinner, Skyped with Ariana and Amy, talked to my folks and have been just taking it easy and trying not to worry about what’s coming next.  I guess the chemo starts to kick in pretty soon so it’s a waiting game now.

I’ll try to post some pics tomorrow and go into more details, just sort of tired and been inside my own head about all of this too much today to want to go over it all here.  Very surreal experience.

Had nothing scheduled today as we’re at -1 and counting.  They use that scale here if I hadn’t mentioned it … -2 for chemo day, day 0 for the transplant, etc.  Amy said she’d get me a few Gigi’s cupcakes to celebrate my “new” birthday tomorrow.

A nothing day here still consists of tests, vitals every 4 hours, and several drugs taken prophylactically (sp?) for nausea, viruses and bacteria.  I’m also hooked up to a constant IV so I have to pee constantly — I’m sure there’s some value to that but with all of the other information I’ve had to absorb it’s simply slipped my mind.

Had a phone session with the therapist back home today.  She emails me to check in quite a bit, which is nice.  Our session went fine and was only half the allotted time — quite frankly I’m not really that upset or torn up about any of this.  I’d attribute most of that to the LexaPro, a bit of whitewashing from the staff here (not in a malicious or misleading way, they just tend to focus on the best possible outcomes for obvious reasons) and the fact that this is all so fucking surreal.

I mean I’m sitting here at the Mayo Clinic getting a stem cell transplant.  It’s easy to forget that sitting here, if that makes sense.  It’s funny because I’ve spent most of my life training myself, inadvertently, to deal with tough times by tuning them out with something entertaining — a video game, a movie, playing with the cats, playing with Ariana, whatever.  So I sit here, doing stuff like that, and manage to forget the seriousness of it all.  Maybe it’s just too much to deal with in a realistic way, too, and so my mind has just snapped into a defense mechanism where I refuse to “properly” attribute the correct level of seriousness to all of this.

Or perhaps I’ve simply cried all of the scared, horrified tears, played out the scenarios so many times they are now broken records, and realize there’s really nothing I can do.  This will play out like it plays out, period, end quotations, next paragraph.

But yeah, it’s more than just a little crazy, and a hell of lot too real to rationalize on almost any level.  It just … is.  I hope this is a step on the path I began when I first found out about this and realized I needed to mentally get to that place of “yeah, fuck this cancer, I’m kicking it’s ass!”  I’ve moved along a continuum from hopelessness, desperation and fear to resigned … indifference?  That word doesn’t seem right though.  Just resigned, I guess.

The chaplain came by today, a wonderful woman.  Being agnostic/atheist I hadn’t requested the services of one but I enjoyed talking to her, as did Amy (who showed up while she and I were talking).  She said she rarely tells patients this but she’s a Unitarian universalist, something I was totally unfamiliar with but I will be researching more about.  She said they welcome everyone, including atheists, and that it’s more about morality and ethics than some dogmatic faith in seemingly capricious deities.  They welcome any religion, and the more she spoke the more  I enjoyed talking to her and found the concepts interesting.

One of the things that’s been hard about this whole process is how many people have said they were praying for me, and had groups praying for me, etc.  I don’t really know how to respond to that.  It’s just such a nice, selfless gesture, you know?  Even if I don’t understand or can’t feel the religious belief they have I can’t adequately state how much I appreciate the gesture.  Hell some positive energy never hurts, even if I don’t agree with the conduit.

I wish I did.  I was listening to a podcast from atheist author Sam Harris months ago and he noted that the major problem with atheism is you have no mechanisms to deal with death and suffering.  I.e., were I a good Catholic, whatever that really is, I could seek solace in the fact that this is all God’s plan, that it’s not for us to understand or question but just to have faith, and I’d know I’d be going to a better place.

As an atheist you’re just there going “well, um, fuck.”

I tried.  I was raised a Roman Catholic but it never jibed with me, and as I got older and more intelligent and began researching the history of religions to find one that spoke to me I became more and more jaded by it all.  I’ve got books on finding God, and have the best translation of the Quaran I could find on my Kindle (not a fun read BTW).  I’ve read about Buddhism, and once let some Mormon kids talk to me in my apartment (while I drank a beer and had a few smokes, not realizing that was the roller-coaster drop straight to Hell in magic underwear land).  I feel like finding God, or at least some organized spirituality to learn more from, has been a distant hobby most of my life; one of those things you occasionally find in the closet and decide to focus on for a bit like a model airplane or a broken radio you swore you’d fix.  I’ve done that since high school really, when I came to appreciate the inner peace spiritual people seemed to exude.

I studied the bible as literature in college, and for the first time as an adult really read the thing.  Multiple times.  And try as I might I could not get past the story of Job.  That may seem strange to people, especially religious ones, but of all of the stories in the bible the one thing that I can point to as why I cannot follow any organized religion is that story and what it really is saying.

But if that wasn’t enough, next I met fundamentalists, and well, yeah.  Bzzzt.  It’s ironic because just two nights ago Amy and I were at the Villa doing a puzzle and Netflixed a movie called “Revisionaries” about the Texas School Board hearings regarding science text books.  Although fascinating, what blew me away was one of the main figures in the mid-2000’s on that board was a “Young Earth Creationalist” — someone who not only doesn’t believe in evolution but believes the Earth is 6,000 years old.

In a position of responsibility to decide what children learn as SCIENCE.

As a parent that is on the short list of things that terrify me along with accidents, boys, hard drugs and the Internet.

So when I say I don’t expect much from talking religion with people, understand where I come from.  Needless to say I wasn’t expecting much when this chaplain walked in the door today but after asking me some questions and hearing my answers regarding spirituality but never being able to find a religion that rang true to me, she didn’t so much give me a sales pitch but just explained what she was about.  So I liked her message and agreed to meet with her tomorrow and let her say a blessing over my stem cells because it’s not going to be about a God but about friendship and love and positive energy, and I think that’s a good thing.  As part of the ceremony she is going to read a Buddhist story, which I think is pretty cool too.

Definitely not what I was expecting of a chaplain here, but this place continues to surprise me.  Everyone is so professional and exudes quality but is friendly at the same time.  It breeds a confidence that I’m in good hands, and that’s really the most important thing.  I’ve experienced some scary health care in my life, even with this cancer diagnosis from excellent doctors, so being able to just relax those anxieties a bit is really valuable to me.

Let’s see, what else.  Couldn’t sleep well last night — when you know someone’s going to wake you up every four hours it adds an odd level of stress to trying to get to sleep when you know you need rest but you aren’t tired.  Plus I’m tethered to this damned IV tower.  Xanax to the rescue.  Not like I needed energy to sit on my ass all day playing SWTOR and watching Ender’s Game over dinner anyhow.

The food here is decent — I had the world’s smallest french dip tonight, but the salad was good.  And my last one for a while — my dietary restrictions post-transplant preclude most vegetables and other things that are at risk of carrying bacteria (washing/cooking deficiencies) as well as eating out.  The chemo hasn’t hit me yet and I feel great today though.  It takes 3-4 days, apparently, but Amy said I looked good today and had good color, so that’s a plus.  Ariana seemed more comfortable on Skype with me as well and said she loved me, which broke my heart.  I shaved my goatee mostly off so the transition to having no hair won’t be as strange for her — honestly out of all of this coming up my biggest concern is not messing with her too badly since she’s too young to understand it.  Thank God Jeff and Amy are here and we have the Villa through March … like I told Amy today, knowing they are all there and Ari’s well taken care of and Amy is relaxing makes being here in the hospital a lot easier for me.

Although if Ariana turns to mommy while we’re Skyping and asks her to change the channel to Curious George again I’m going to get offended, heh. 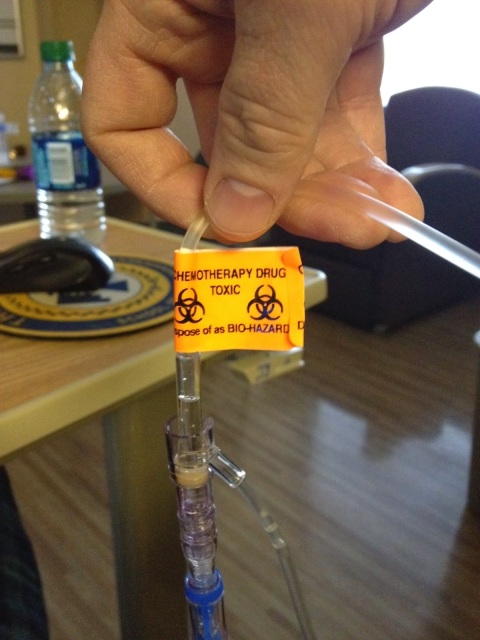 My name is Rich, aka uwfacepalm, and this blog details my fight with multiple myeloma, a rare and incurable blood cancer. I was diagnosed in mid-2013.

And … Cancer.
Blog at WordPress.com.