Took my first dose of the new chemo regimen this morning.  Revlimid pill chased with a low-dose aspirin, an Acyclovir, a Bactrim and some calcium.

Freaked out, depressed, anxious, you name it.  Questions continually form in my head mixed with doubts that overwhelm slender, battered hopes.  There’s just no scarier thing I can think of than chemotherapy … HIV drug regimens, maybe, but my understanding is that that’s no longer a death sentence.  Will this work?  How long until it stops?  Will I have side effects or totally reject the meds?  The mind never shuts down.

Took Ariana to Tiny Town yesterday … kind of ridiculous, but I saved the tickets for the train.  Thought I’d insert them in my next letter to her, a little treasure to have along with the words. 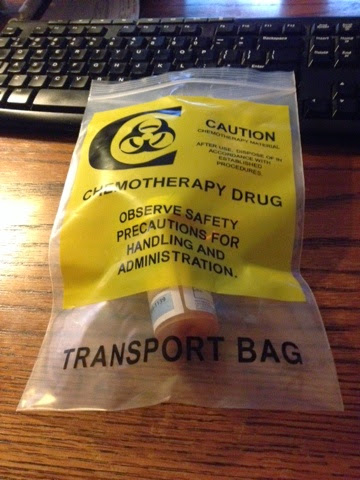 Hate bills?  Be thankful, I get bills and this fun stuff in my mailbox.

It’s been a while, hasn’t it?  I suppose that’s pretty rude of me — when you have a blog about having a terminal disease, vanishing for two months isn’t exactly “nice” to people who get news about you from it.  So sorry, for what it’s worth.  I know anyone I actually know personally that reads this, however, can (and does) text or call to get updates if I’m gone from here too long.

The news hasn’t been good which is the primary reason I haven’t written.  I’ve certainly thought about it a lot these past few months, but this is painful to me — understand that most of the time I keep composed about all of this by doing my utmost NOT to think about it.  I can’t do that when I write, however — it just all comes streaming out and most of this cancer-related stuff is really hard on me, emotionally, to keep going over and over.  But I will try to keep this updated more.

To make a long story as short as possible, I was doing pretty good mentally and emotionally and then I got my 60-day results.  They indicated that the stem cell transplant hadn’t been very effective.  That subsequently sent me spiraling into depression but I still tried to keep my spirits up, telling myself that Dr. M. at the Mayo Clinic had said the 100-day results were really the ones to pay attention to.

Unfortunately, the 100-day results, as I found out the first week of June, weren’t anything to cheer about either.

So, best case scenario at the 100-day was that my bone marrow biopsy indicated I was in remission and I wouldn’t have to do any maintenance chemotherapy.  Next best would be having to do maintenance chemotherapy, which is a low-dose chemo designed to, well, “maintain” things.  Then there’s me — I get to start a full chemotherapy regimen, this time with Revlimid and Dexamethasone.

My wife was NOT excited about the dex.  Apparently I roid-rage pretty badly on it.

Since then I’ve just been trying to keep my head up, you know?  I was in a bad, BAD funk after the 100-day visit.  My doc tried to be somewhat reassuring, but even he admitted this was not what he had hoped for.  He described my disease as “stubborn.”

But all I could think about was my daughter back home.

Here’s the thing, and I guess I’ve written about this before.  I don’t care if I die, really.  I’m certainly afraid of the concept, as much as I can get my head around it (can anyone?).  But it’s not like I would be leaving a personal life unfulfilled … EXCEPT for where my daughter’s concerned.  I don’t have a big bucket list of things that are all that important at the end of the day; most of my bucket list, in the end, is pretty frivolous (dive trip destinations,etc.).  I’ve made great money, and provided for my family financially and with a home.  So I boil it all down and all that is left, with all due respect to my wife, whom I love, is my daughter.  She’s all that makes me smile anymore.  And now here we are again, with me wondering whether I’ll make it to her being a teenager.

I think I’ve written about this before, but the hardest part, in some ways, is the perspective I’m forced into with this.  Take Sunday, for example.  My daughter (with help from mommy) woke me up with hugs, kisses and “I love you’s.”  I’ll never forget that.  Ever.  She, on the other hand, will probably not remember it very long since kids tend to forget everything before age 5.  So the things that are so important to me she won’t even remember.  What will she get to remember?  My last years, when she’s still in single digits?  I’m tormented, haunted by this on a daily basis.  Almost as bad is that I’ve realized there really is nobody who knows me well enough to let her know, later in her life, who I was.  I try, with the letters I’ve been writing her and storing in the lockbox, but that’s not enough.  Who’s going to tell her that I may have failed a lot but I always tried to do the right thing?  About how much I loved diving, or video games, or Iron Maiden?  Who’s going to teach her to ride a bike, or how to play poker well, or how a love of reading will serve her so well?  Who’ll be there for her prom night, or teach her how to drive?  To give her a hug or hold her hand when it’s needed?

The problem with multiple myeloma, especially when it’s being “stubborn,” is statistically the answer to all of those questions is “not me.”  And for some of them the answer’s nobody, and that hurts a lot as well.  It would have been nice if at least she knew who I was.

I know I’m putting myself into the grave with that last paragraph, but that’s the pragmatist coming out.  This is the stuff that keeps me awake at night, every night.

I can discuss my disease with just about anyone without getting too upset — but mention my daughter and I start tearing up, instantly, uncontrollably.  I just can’t handle it.  I take Xanax nightly to keep from waking up at 3 am dreaming about my daughter crying and asking my wife where daddy is after I’m dead.  She asks me every morning where I’m going, and when I tell her “work” she sounds so sad and disappointed when she asks me to stay and play with her and I can’t.  There’s 1,001 more examples I could give, but in the end it’s like none of this is real except where she is concerned.  I still don’t feel sick at all, and as far as I can tell I don’t have any symptoms — had some odd bone pains here or there, but nothing I would be inclined to attribute to more than a bump or spending 5 hours in front of the computer with my forearm in a weird position.  But I’m assured, test after test, that I am in fact dying.

I think about that a lot — I would have no idea, as far as symptoms are concerned, that I actually have terminal cancer right now.  They keep telling me I do, though, and then my heart breaks again for that little kiddo.  I mean fuck me, right?  But she doesn’t deserve this.  She eats well, and she’s polite.  She’s so kind and has been through so much with her cleft palate already.  Why does she deserve to have her father die?

Enough.   I can’t be doing this at work right now.

I got the call today about my Revlimid prescription and I’ll probably be starting it within 3 days now that insurance has OK’ed it ($8,000 a month).  I get to take a host of other stuff with it as well — the dex, as mentioned, baby aspirin to keep from getting blood clots, the anti-viral stuff, an anti-biotic … add those to the LexaPro (which, sadly, I had hoped to get off if I didn’t need maintenance chemo) and the Xanax to sleep and I’m a walking pharma-dumpster.  Joygasm.

I’ll try to update more often.  Hug the people you love, you’d be surprised how fragile and fleeting life really is.

My name is Rich, aka uwfacepalm, and this blog details my fight with multiple myeloma, a rare and incurable blood cancer. I was diagnosed in mid-2013.